Thanks to Teacher Tammy Appell for submitting her students symbols.  The following images were included in my legacy artwork.

Posted by Unknown No comments:

Congratulations to Ms. McGregor's students- the following submissions were included in my legacy project.

The student's teacher, Larry Fuchs, had each students write about their symbol. 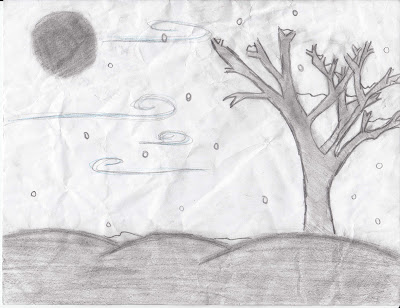 Avery-
My picture shows cold Saskatchewan winters.  My family and I enjoy winter a lot.  The colours black and white make it look more realistic and the light-blue-wind makes the picture pop.
The tree with no leaves represents the change sin the season going from summer to winter.  The moons meaning is that our nights get dark very early in the winter/fall.
The light snowfall is in this picture because it represents the very beginning of winter.
This picture is special to me and relates to me because I love drawing so much and I also love winter time. 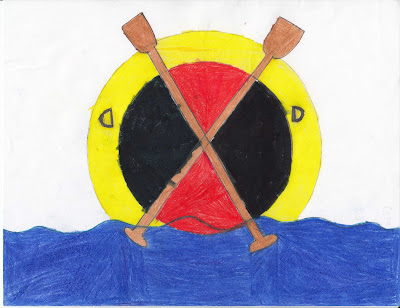 Briley-
The circle is a yellow tube as was the one that we used that day when we first went tubing.  The things crossing out in front of the tube are paddles which were wooden and a beige-ish colour.  Also the bottom of the page is obviously blue water.  The why the middle of the tube is black and red because those are the colours of the boat that took us on our wild adventure!!!!
I chose this picture because of tubing because my whole family loved it and thought it was great.  My picture consists of a yellow tube and two paddles going across, and below is the blue water. 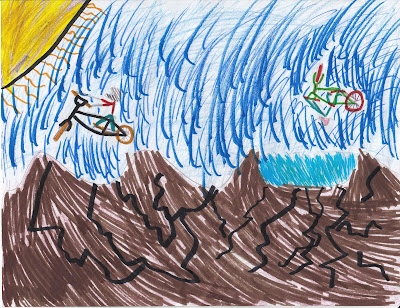 I designed my picture of 2 boys BMX riding at dirt jumps because every month (in the summer) I try to get there with my best friend.
I chose the colours of the bikes because they are the actual colours of me and my friend's bikes.
I drew those two particular jumps because they are the jumps that I have wiped out the most on.
Also, in my picture the moon is still out and it is daytime.  I did that because all the times I have been there and the moon is out I completed the track without wiping out.

And the main reason I drew a bmx track for a symbol of Saskatchewan is because we have the third best track in Canada. 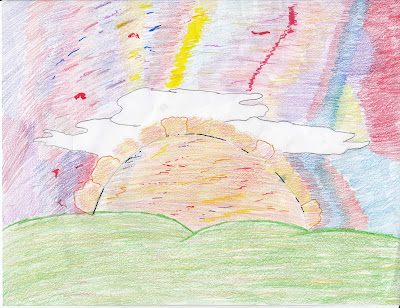 Cindy-
I drew a sunset, I picked to draw this because my family and I love sunsets!  I picked the colours blue, purple, pink, green, orange, red and yellow because Saskatchewan is known as "the land of the living skies."  I also picked it because no where else in the world has as many or as beautiful sunsets!

Beneath the sunset there are some foothills with a wide open prairie, this is because Saskatchewan is a very flatland it has no mountains or high points of land.
!SASKATCHEWAN! 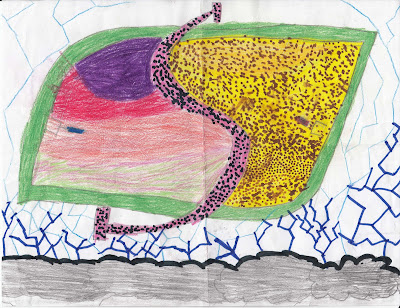 Cody-
I decided to put the Saskatchewan Rough Rider symbol on my design because my dad and I went to the Labour Day classic the day my sister was born.  I made the "S" pink and black for the potash and potash mines in south Saskatchewan.  I picked yellow and brown for the wheat all over Saskatchewan.  I decided to put a drawing of a sunset for the "land of living skies."  I put the lightning because I love a good Saskatchewan thunder storm.  That is why I picked the symbols I did. 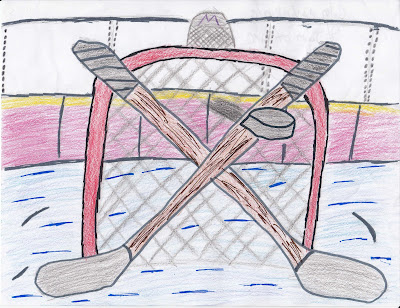 Colin-
The reason I chose hockey is because every time it snows my brothers and I play hockey.  We have a lot of fun and don't get hurt so it makes it better.  It's like hockey is the only thing that makes my brothers and I bond.  It's as though like the only time we never argue or fight each other.
The reason I chose yellow and purple on the boards is because they are one of my family's favourite colours.  Hockey seems to bring my family together and have fun together.  We never have any family time together any more so that's why hockey is one of my favourite sports. 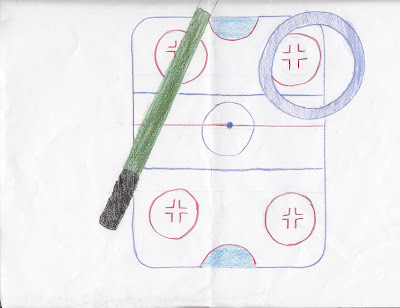 My symbol is a picture of a rink, ringette stick, and a ringette ring.  I picked this because this is my fifth year playing ringette and is my favourite sport.  I want to be on the Saskatchewan ringette team.  The green stick represents the first colour that comes to mind when I hear the word Saskatchewan and the red and blue represents the colours of the lines on the ice. 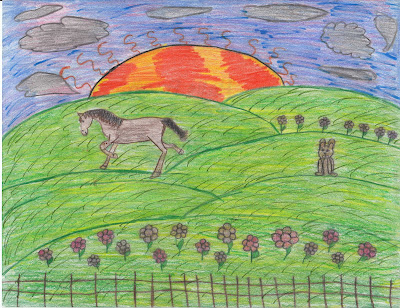 Halle-
My picture is about when I'm traveling to extraordinary places, and I see lots of bright green grass and sunsets.  I chose the flowers because when I was little I would go camping and pick flowers that I thought were breath taking.  Then I would put them in a vase and put it on my window sill.  I put the fence there because I would see a never ending of fence further than the eye could see.  I chose the horse because it brings back memories of going to Dallas Valley, or going camping and riding horses.
Ever since I was little I just adored and thought horses were beautiful and amazing creatures.  I chose the bunny because by my house there used to be bunnies playing and being adorable, so I just think they're so cute.  I chose the sunset because Saskatchewan in the land of the living skies.  Some nights the sky could be pink, blue, and purple, so thats why I chose those colours.  Thats my symbols and thats what Saskatchewan means to me. 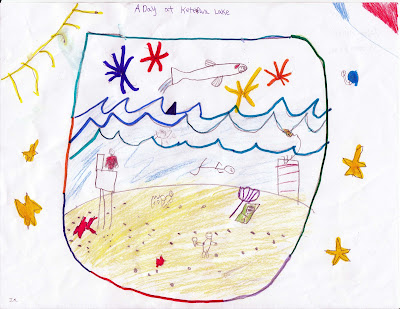 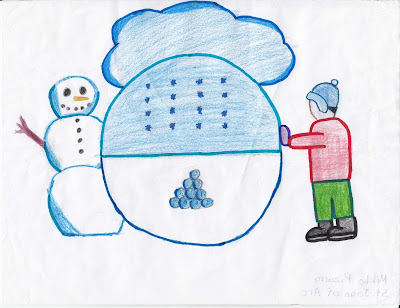 Mikko-
My symbol is about snow because when I first came here everything was covered in snow, it was so amazing even if it's cold.  Children were playing in the snow, laughing and smiling, I joined them and it was so fun.  When snow falls my friends and I work together to create a snow fort, it was difficult but it was worth it because it turned out really good.
Snow makes people to work together and people in Saskatchewan worked together to build this beautiful province.  I chose the colour blue because it's the colour of the sky, I chose the colour white because it represents snow and I chose the other colours because everyone has different eye, hair and skin colour. 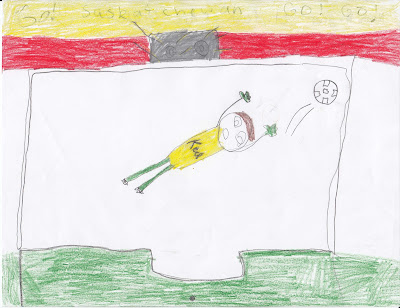 Noah-
I made the goalie trying to save a cruising shot in soccer because I love soccer.  Saskatchewan may not have a soccer team but there are teams in Canada.
I tried to use green because...well that's the main colour!  Any way I came up with this idea how you ask?
Well I narrowed down things that I have interest for example soccer, video games, football and food.
Out of the four I decided on soccer because food and video games wouldn't cut it and I picked soccer over football because.
It's easier to draw and that's why I picked soccer. 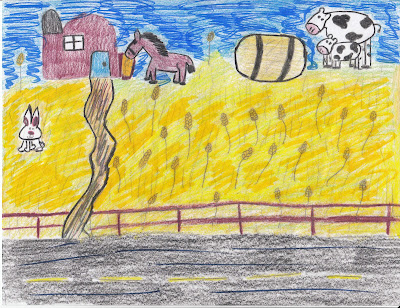 Sydney-
I chose a crop of wheat with a little farm house as my symbol because my family travels throughout Saskatchewan a lot and from my experiences, whenever we are driving on a highway, all I'll ever see are pastures of golden wheat and hay bales.  I really enjoy spotting the houses and animals because when we are on the road, we play a game that require you to seek and find the wonderful animals and other things that not every day you notice.  For instance, if you was a calf or a bull you'd say, "My calf!"  After we've reached our destination, we'd add up all the wildlife we found during the trip, and then on the way back home, we'd use our eyesight to spot some more amazing features to the edge of the highway and beyond.
My symbol identifies how I see my province, Saskatchewan.  Saskatchewan is blue skies, and spectacular glowing golden wheat in the country side.  It to me is a place to explore.  Saskatchewan is hills to roll down, and fields to play in.  The land of living skies and the miles and miles of wheat are what make Saskatchewan the best place to live and the best ideas for the perfect Saskatchewan symbol.

The student's teacher, Ms. Fischer, asked each of the students the following questions:
What did you draw?
Why is it important to you?
What does it represent? 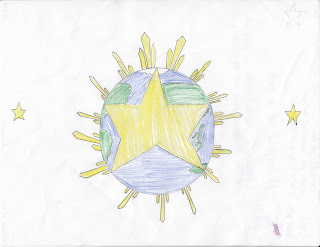 Cyril-
A Sun, star, and the earth.
Because a sun and star is part of the Philippine flag and my country is important to me.
The world and my country. 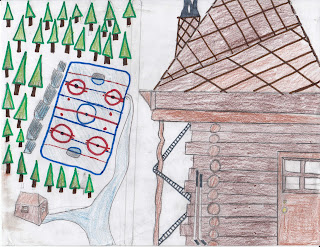 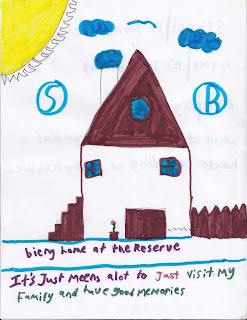 It's my grandma's house reminding me of Saskatchewan. 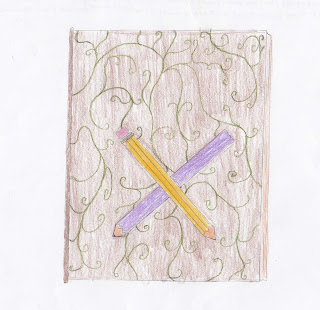 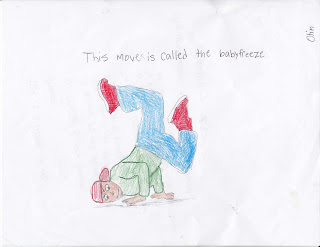 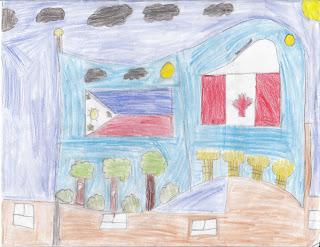 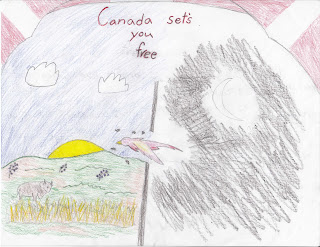 Colten-
I drew a bird flying through a metal bar.  Because I love birds and nature.  It represents how Canada will always let people have freedom.
Posted by Unknown No comments:

Here is the completed Legacy Painting!

Here are the 100 symbols used in the underpainting. Some peoples submissions were integrated into the frame.

Submit your symbol EXTENDED TO November 5!

What does Saskatchewan mean to you? Your symbol could be a person, animal or object, it could even be an existing logo! You can use the Submission Form or simply email a photo of your symbol (please create a file size of between 1-2MB). Symbols can be created using drawing, painting, photography or mixed media. . You may also attach a written description of no more 400 words explaining your symbol

Please include your name, mailing address, and name of parent or gudardian if you are under the age of 16 years, with your submission.